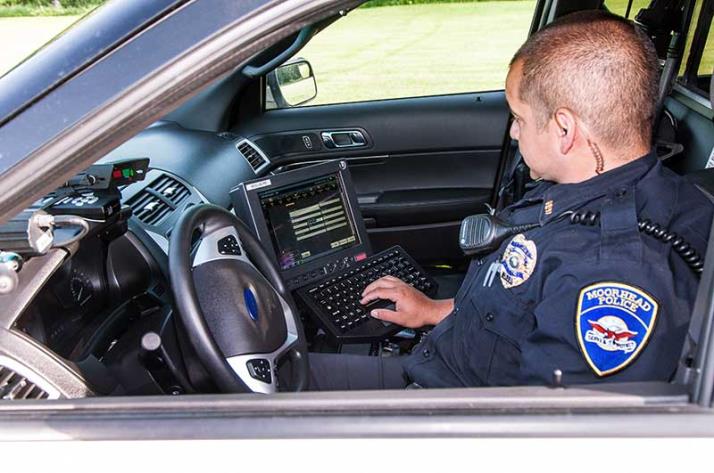 We replaced our Mobile Data Computers (MDC) with ruggedized tablets in 2018. They are designed to be used in police cars, as they are extremely durable and user friendly. The touchscreen feature allows officers to efficiently interact with the many different applications they use during their shift. The tablets can be removed from the squad to assist officers in processing DUI arrests or issuing citations at loud parties.

All of our patrol cars have a mobile video recorder (MVR) system. This allows officers to digitally record all traffic stops as well as any other activity they feel might be important. If the officer sees a violation, the system automatically captures the 60 seconds prior to the violation. There are three cameras in each patrol car to record the windshield view, panoramic windshield view, and the back seat. These videos have proven to be a valuable tool in prosecution of criminal cases and resolution to internal complaints. Our system is constantly recording video and has a feature called “Record After The Fact”. This allows an officer to go back and get video that may not have been recorded initially. Depending on the use of the vehicle, some videos have been available almost three weeks after the incident occurred.

In some of these videos, there is no audio for the first 30 seconds.

The driver who fled was apprehended 3 blocks away by responding officers. A loaded handgun and felony quantity of narcotics were found in the vehicle. The driver was charged with felony fleeing in a motor vehicle, felon in possession of a firearm, and felony possession of a controlled substance.

This driver fled from Fargo and Moorhead Police Officers. He was taken into custody and charged with several offenses including reckless driving, felony fleeing in a motor vehicle, and obstructing legal process.

An officer on routine patrol captures an accident at a Moorhead intersection.

Each officer is equipped with a personal digital recorder for taking statements from victims. They also have the X2 Taser. This Taser is equipped with cameras to record video and audio of incidents in which they may or may not be deployed. Each patrol vehicle also has a digital photo camera that is used to document a variety of things such as injuries from assaults, damage to property, poor living conditions, location of evidence, and motor vehicle accidents.