Article I. Purpose and Goal

The purpose of this policy is to establish criteria and procedures the City will use to evaluate requests for, and if appropriate, implement traffic calming measures. Neighborhood traffic issues are typically characterized by vehicles exceeding the speed limit, cut-through traffic, vehicle crashes, and near-miss incidents. Many of these issues cannot be resolved with regulatory traffic control measures (which are limited by statutory requirements such as compliance with the Minnesota Manual on Uniform Traffic Control Devices) or advisory traffic control measures that have been shown to be ineffective.

The goal of this policy is to establish a consistent method for evaluating traffic calming requests in accordance with sound engineering principles to maximize public safety, enhance the quality of life in neighborhoods, and maintain reasonable mobility.

To be eligible for traffic calming, streets must satisfy the following minimum criteria: 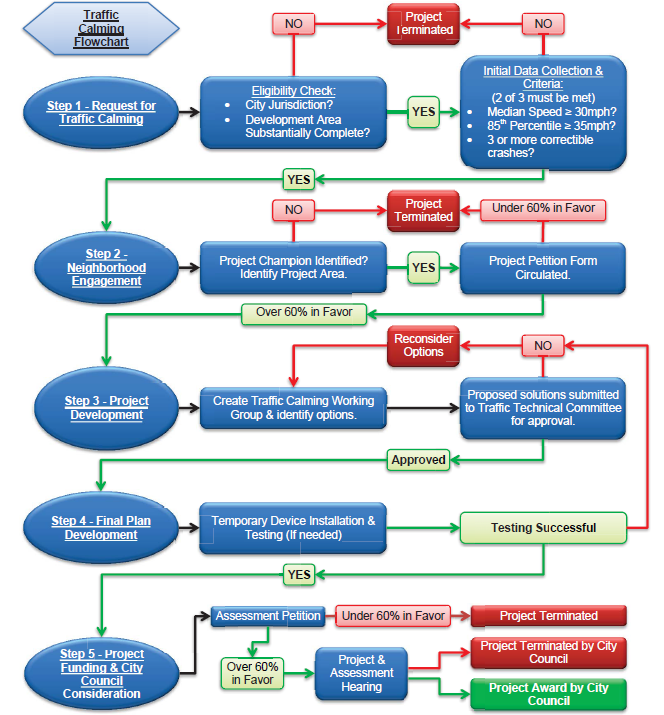 The Traffic Calming Program provides a mechanism for neighborhood groups to collaborate with the City to manage traffic in their neighborhood to address documented traffic concerns including excessive vehicle speeds, high volumes of non-local traffic, vehicle crashes, and conflicts between motorized and non-motorized users. This Article describes the steps involved in the program.

The Traffic Calming Program provides an opportunity for all neighborhood stakeholders to be involved so that the needs of the neighborhood as a whole can be appropriately considered and proposed improvements do not create issues on adjacent streets.

Typically, traffic calming requests begin with a phone call, email, or visit to the Engineering Department with a complaint about perceived excessive speed, cut-through traffic, or a safety issue on a neighborhood street. The City has also established an on-line request form. All candidate requests are referred to the Traffic Engineer to determine if the traffic calming program is the appropriate tool for the conditions described in the complaint.

The traffic calming process begins by verifying that the requirements of Article II are satisfied. Engineering staff will collect preliminary data to characterize current conditions. This data may include, but not be limited to, location, description of the problem, crash data, bicycle volumes, pedestrian activity, traffic speed, and traffic volume.

Traffic calming projects are intended to respond to traffic issues related to speeding and/or excessive non-local traffic on one street or intersection within a neighborhood. Solutions may include modifications to the street to slow traffic or to divert through traffic from the subject street to a nearby collector or minor arterial street. Traffic calming projects will only be considered insofar as the improvements do not divert a “significant volume” of traffic from the study street to another local street. The definition of a “significant volume” of traffic will be established by the participating neighborhood group (in step 2) with the assistance of the Traffic Engineer. A traffic calming plan which is estimated to cause significant diversion to another neighborhood street may result in the termination of a traffic calming study.

Upon completion of initial data collection and analysis, a determination will be made to either continue the traffic calming process, or terminate and close the request (if the criteria in Article II are not satisfied). The requestor will be notified of the Step 1 determination in writing.

Once a determination has been made that the base criteria for traffic calming have been met, the Traffic Engineer will work with the affected neighborhood to designate a project champion. The project champion will serve as the neighborhood representative and assist in defining the affected area. In the identification of the affected area, a clear nexus should exist between the reported concern and the impacted properties. In addition, consideration should be given to those property owners that do not have an option of avoiding traffic calming measures that may be installed. To preserve flexibility, this policy does not include a strict definition for the affected area.

In conjunction with the project requestor and/or project champion, the City may facilitate an initial public meeting in the project area. The purpose of this meeting is to inform residents of the traffic calming request, to describe the traffic calming program, and to gather additional information about traffic issues within the neighborhood. At this time, a Traffic Calming Working Group may be formed. This group will work with City staff to establish membership and meeting procedures and will continue to work closely with staff throughout the project.

A “Neighborhood Traffic Calming Petition” form will be sent to the project champion to be circulated in the study area to evaluate neighborhood interest and willingness to participate in traffic calming. This petition process is used only to determine if there is sufficient neighborhood support to expend staff resources on project development. The Traffic Engineer may modify the petition (or affected) area to address unique circumstances.

Affirmative signatures representing a minimum of 60% of the property owners within the study area are required for a street to be considered for traffic calming. Each property owner is entitled to one signature. If the petition does not meet this threshold, or has not been completed and returned to the Traffic Engineer within four weeks, the request will be terminated and the requestor will be notified of the Step 2 determination in writing.

Project development consists of the following:

Working with the Traffic Calming Working Group, the City will propose solutions based on property owner input and sound engineering principles. Improvements will focus on speed and/or volume reduction without negatively impacting capacity, safety, or function. Priority will be given to the lowest-cost, least-intrusive (non-physical) measures as a first consideration. Proposed improvements must balance traffic mitigation with needs for street maintenance and emergency services. In addition to considering traffic management and control devices, plans developed in the traffic calming program will also consider the positive effects of education and enforcement. Alternative solutions and associated impacts will be evaluated by the Traffic Calming Working Group. Comments and/or recommendations will be solicited from other affected departments (e.g. Police, Fire & Rescue, Public Works, Planning & Neighborhood Services, Transit, etc.) and shared with the Traffic Calming Working Group.

The Traffic Engineer will submit the recommended solution to the City Traffic Technical Committee for consideration. The committee will review the plan with respect to positive and negative consequences for public safety and emergency services, public works operations & maintenance services, local neighborhood traffic operations, transit access, and pedestrian and bicycle safety.

If the Traffic Technical Committee expresses concern with the recommended plan, specific issues may be referred back to the Traffic Calming Working Group for revision, further study, or termination of the request.

Once approved by the Traffic Technical Committee, the project is considered active for up to three years. If, after three years, a project has not continued to completion, the project champion and/or Traffic Calming Working Group will be notified it will no longer be eligible for consideration. This time limitation is intended to ensure that the project requests continue to remain a neighborhood priority and avoids expenditure of City resources on projects with little neighborhood interest.

Once a plan is approved by the Traffic Technical Committee, City staff will develop plans & specifications for the improvements including a detailed cost-estimate. Depending on the complexity of the project, the City may install a temporary device for up to 30 days to evaluate the effectiveness of the proposed improvements. For most projects, a temporary installation will not be required.

If a temporary device is installed and  is found to be unsafe or ineffective, development of plans & specifications will be terminated and the process will return to Step 3.

Project funding and approval is generally conducted in accordance with Minnesota Statutes, Chapter 429 (which governs the use of special assessments to construct local improvements) and the City’s Special Assessment Policy with some minor modifications noted below.

A petition complying with this policy will be prepared and provided to the project champion and/or Traffic Calming Working Group. The benefiting area (special assessment district) will typically be the same as the initial petition. However, if the scope of the project has changed significantly from the time of the original petition, the benefiting area will be revised accordingly. For projects that are expected to result in traffic diversion and a corresponding traffic volume increase on other local streets, property owners on these other affected streets will be included in the notification area prior to the public hearing.

Estimated project costs and estimated special assessments will be included with the petition. Project costs will be allocated as follows:

Generally, project costs (special assessments) will be allocated on an equivalent single family lot basis with costs and applicable fees assigned to all parcels in the benefiting area. However, an alternate allocation may be used based upon recommendation of the Traffic  Calming Working Group. If a project proceeds, special assessments will be levied to all parcels in the benefiting area (i.e. a project cannot proceed with voluntary special assessments levied only to property owners signing the petition). The petition must be returned within four weeks.

The petition will be processed as follows:

If a project is terminated in Step 5, a notice will be sent to the project champion and/or Traffic Calming Working Group and the project will not be reconsidered for a period of at least three (3) years unless the Traffic Engineer determines that significant changes in traffic volume, traffic speed, or accident history justify reconsideration.

If the City Council orders the proposed traffic calming improvement, the project will proceed in accordance with Minnesota Statutes, Chapter 429 and other statutory and/or local requirements.

The City will oversee the construction and perform routine maintenance on any traffic calming device authorized and implemented within the traveled way as part of this program.

Major rehabilitation and/or reconstruction of a traffic calming improvement will be funded through the same procedures as initial project construction (Step 5); however will not require the neighborhood petition process be repeated.

MN Statute 169.14 establishes statutory speed limits on most roadways in the State under ideal conditions. All other speed limits must be established by the Commissioner of the Minnesota Department of Transportation (MnDOT) based on an engineering and traffic investigation.

The City Council may, upon recommendation of the City Engineer, consider formal requests to the MnDOT Commissioner to evaluate and establish non-statutory speed limits on minor arterial and collector streets when a speed limit other than (e.g. greater than) the statutory speed limit is appropriate.

MN Statute 169.14 identifies specific requirements applicable to work zones, school zones, and other special cases. This policy does not supersede or modify those requirements.

The City reserves the right to modify this policy at any time if deemed to be in the best interest of the City based on safety, social, political and economic considerations.

The City Engineer and/or Public Works Director, or his or her designee, may authorize a deviation from the implementation of this policy with respect to a particular location when deemed to be in the best interest of the City based on safety, social, political and economic considerations. Such deviation shall be documented including the reason for the deviation and other information supporting the deviation.

The City has relied on numerous resources to develop this policy. These resource materials include, but are not limited to, the following: